6 Translation Accounting Nuances You Should Know

The translation process converts local currency financial statements of subsidiaries into USD based financials for consolidation and reporting purposes.

This is a relatively simple accounting process that’s typically performed by software in today’s accounting environment.

At its simplest, translation occurs by converting all assets and liabilities at the month-end accounting rate, converting the income statement at the transaction rate, equity at the historical rate, and the delta is recorded to cumulative translation adjustment (CTA). This produces a balanced set of financial statements in the reporting currency.

So, while the process is simple, it does create some unusual and perhaps unexpected results. In this article, we discuss six more advanced topics around translation.

The way a company sets and uses its accounting exchange rates may create surprise results in the P&L.

For example, if inter-company is recorded at a daily or weekly rate, but the account is later translated at an average rate, then the inter-company income accounts between the two entities will not eliminate in consolidation. To eliminate them, the systems will generally defer to the rate used in consolidation, re-casting the original inter-company as if recorded at the translation rate, which in turn changes the revaluation result in the P&L from the gain/loss calculated between the original transaction recording rate and the balance sheet rate, to the translation rate and the balance sheet rate. This explains why some companies experience “P&L noise“ in the translation process.

In addition, when a company uses daily or weekly rates to record activity, followed by a different translation rate for consolidation, third party USD-denominated revenue (and/or expense) will end up reported in consolidation at different USD values.

Let’s look at an example. Suppose $100 of USD denominated revenue is recorded on a foreign functional subsidiary’s books. Assume the subsidiary is euro functional, and the transaction rate on sale date is 1.15; hence the euro revenue value would be €86.96. Let’s next assume that the average rate for translation purposes is 1.12. When the €86.96 is translated at 1.12, the $100 third party revenue will appear in USD in external reporting as $97.39. Anytime transaction rates and translation rates differ, there could be this anomaly. Where did the $2.61 go? CTA.

#3. What is Happening to COGS

A similar shift in value happens to inventory that is transferred to a foreign entity. When a foreign functional subsidiary takes possession of the inventory, its value from that point until it is recognized in earnings is moving with the currency. Permanently buried away in CTA will be the difference between the rate at which an entity received the inventory onto their books and the rate at which it appears in consolidated earnings as Cost of Goods Sold.

Something not often talked about is when to release CTA into income.

Amounts recorded to CTA from an investment in a foreign subsidiary are not taken into income when the balance becomes payable in the foreseeable future. On the other hand, CTA is recorded into income as a realized gain or loss on the parent’s books when there is a substantial liquidation of a subsidiary. A merger of subsidiaries does not meet this definition, but a third party sale of substantially all assets and liabilities would qualify.

Even when a previously designated “long-term inter-company” balance becomes current or is eventually paid down, the CTA that had accumulated remains until the substantial liquidation of the subsidiary. Same treatment for gains and losses on derivatives hedging the Net Investment in a foreign entity. All those gains/losses will remain in CTA until substantial liquidation of the sub.

You probably remember learning somewhere that once goodwill is recorded, it is frozen at the recorded value. This is true to an extent.

When foreign-denominated goodwill is recorded on a U.S. set of books, the value of that goodwill amount is locked into a USD amount that will never change. But if that same goodwill was recorded on a euro set of books, then the deferred revenue is locked in at a euro value. During translation, the USD translated value of the goodwill will change based on the month-end exchange rate. So, while the euro amount is known, the USD amount is variable. The changes in the value of goodwill will need to be defined as currency-related in discussions of changes in goodwill in quarterly disclosures.

Changes in goodwill, like the change in inventory, deferred revenue, and other non-monetary items are captured in the translation process, impacting CTA.

Accountants are often asked to proof monthly CTA amounts to ensure they are correct. Companies can comply by using this simple calculation to validate each subsidiaries’ individual changes in CTA, or to validate the combined changes to CTA of a group of entities with the same functional currency. See the calculation below: 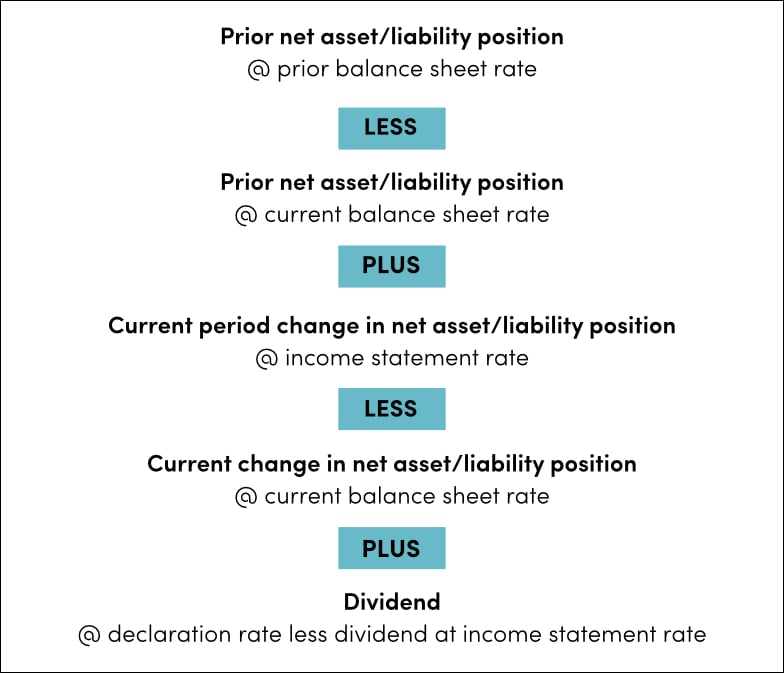 For more information about intermediate accounting topics, contact us.